By John Verser for the Western Nebraska Observer 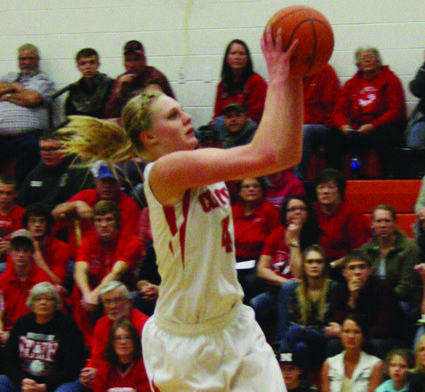 Potter-Dix's Payge Hoffman fires off a jump shot during the recent game against Hyannis. Despite the Lady Coyotes best efforts, Hyannis rallied in the end to take the win.

Hyannis rallied late to upend Potter-Dix in the District D2-6 finals on Friday by a 44-39 score.

The Lady Coyotes led for much of the game, but foul trouble hurt them down the stretch. Three Potter-Dix players fouled out in the final six and a half minutes of the game. A pair of Hyannis players also fouled out, but one of those came in the final minute after the game was in hand.

Things went the Lady Coyotes' way early as they held a 9-7 lead after the first quarter. They opened the second quarter on a 7-2 spurt, with a three-pointer from Audrey Juelfs and buckets from Trinity Langley and A...