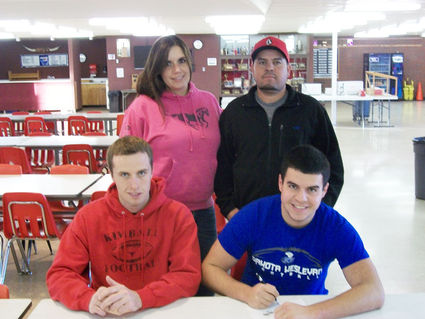 Enrique Cajero signs his letter of intent with coach Nick Kuxhausen looking on along with his parents Magdaleno and Monica Cajero.

Jonathon Withrow and Enrique Cajero signed their letters of intent to attend Dakota Wesleyan University in Mitchell, South Dakota this week while their families and Kimball High football coaches looked on. Actually, Dakota Wesleyan had three verbal commitments from Kimball High players as Ben Sauter had also gave a verbal commitment but is now undecided as he has some shoulder problems that is keeping him on the fence right now.

The Tigers have recruited 41 incoming players according to information forwarded to the Observer, the largest class this early ever for fourth-year head coach Ross...