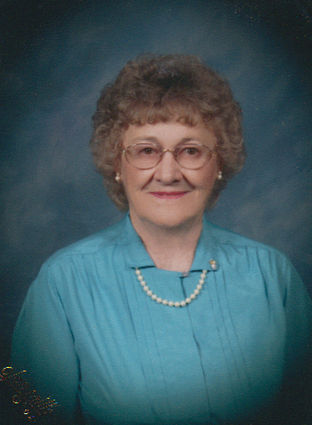 Mary Louise (Sterle) Greb was born on June 19, 1927, in Bushnell, the daughter of Joseph and Rose (Klobuchar) Sterle.

Mary grew up on a farm in Kimball County, graduating from Kimball County Hugh School in 1946, where she was an honor student and won many academic and athletic awards. Mary was united in marriage to Chauncey Coxbill Jr. on Sept. 29, 1946. This union was blessed with five children: Bob, Dick, Bill, Don and Debra. Mary was united in marriage to Robert H. Greb on April 27, 1988, adding step-daughters, Susan and Bobbette to her family.

Mary was employed by Northwestern Bell in 1945 as an operator until 1952. Mary also worked at the Ordinance Plant and for Dr. Robert Sherred as an eye care fashion consultant. Mary also enjoyed selling Avon most of her life and was a star mail route carrier. Mary then worked for the United States Postal Service as a clerk and a loan clerk, and achieving postmaster until retiring in 1989 to enjoy traveling with her husband Bob.

Mary was very involved in her church and enjoyed being the church organist in Kimball and Nysted. She passionately lived out her love of music playing the piano and the harmonica, and seeing her favorite Daniel O'Donnell in concert. Mary was also an active member of many activities including: home extension offices as county president, numerous school committees, PTA, Den Mother of the Cub Scouts, member of the Rebekah Lodge 308, VFW Auxiliary, Platte Dueshe, Parents without Partners, Lions Club, Community Action, Head Start Bus Driver, wrote for the St. Paul Newspaper, March of Dimes, Red Cross, and Red Hat Society. Mary also enjoyed softball into her 40s where she organized girls/women's softball and was pitcher for her team. She was awarded first place state winning pitcher.

Above all, Mary was a very involved mother and grandmother to her family, hosting many holiday meals, going to ball games, musicals and dance recitals, and many other family functions. Mary also had many great friends that she cherished going to dances and card clubs with.   She will be greatly missed.

Visitation, with family receiving friends, was held Tuesday from 5 to 7 p.m. at All Faiths Funeral Home.

Services were held Wednesday, Jan., 28 at 10 a.m. at the United Congregational Church with Rev. Lonnie Logan officiating. Burial will be held at 3 p.m. at Lincoln Memorial Cemetery in Lincoln.

A memorial has been established in Mary's honor and kindly suggested to Grand Island Lakeview Alzheimer's Care Unit or the Alzheimer's Association.

Online condolences may be left at http://www.giallfaiths.com