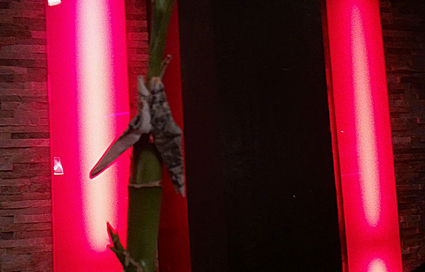 The menu at Dozo reads at times like one at a college bar.

For starters, you can sample hot wings drizzled with lava sauce, “dynamite” mussels, “firecracker” shrimp and spicy chicken nuggets. It’s almost as if that guy from the TV series Man vs. Food had a hand in things.

One thing the sushi spot located in Lincoln’s Haymarket district will not substitute is avocado. The soft green fruit takes the spotlight in seven of their 12 sushi roll options, all 11 over the restaurant’s specialty rolls, seven of eight from their crunchy list and three of the four fried roll selections. Add the prominence of cream cheese, a rainbow roll leaning on “white fish” and a couple choices built around mozzarella and you begin to wonder how long it took Dozo’s staff of sushi chefs to swallow their pride.

How does one return home to a traditional shop after pummeling yellowtail with jalapeno, onions and cilantro?

Perhaps there is more to the place than California roll chic. A fried roll labeled “Tuna Fire” forces a speck of fish to surrender at figurative gunpoint to asparagus, avocado and Italian cheese. Yes, it sounds at worst like an upscale pizza try out gone awry, but as the tuna gives in to the inevitable, it dies with a mushy sigh that rivals the other ingredients.

Yet the place will spin around and surprise you. Their “orange blossom” shapes salmon cucumber and the faintest trace of tobiko—yes, as well as the ever present avocado—into something like a teardrop or the quaff of a Cupie doll. The result is a delicate combination of flavors and textures resembling a down pillow. Salmon ripples with porcelain rivulets of inviting fat. Freshwater eel nigiri offers a cushy mouthfeel and rich, smoky savor.

Still, there is a stillness to the place, an emphasis of form over function. Ikura—salmon roe—yields lazily before unleashing its salty, fishy essence over packed rice. Sashimi tuna rings with a tinny flavor, as if carelessly defrosted. Like so many mid-level sushi joints, Dozo refers to escolar as “white tuna.”

Sure, it’s a handsome restaurant housed in the cool Haymarket area. But looks can deceive, obviously.

The Lincoln hotspot appears to be designed more for the student and tourist trade than for sushi aficionados. No hard core joint, after all, would proffer “white fish” (which I assume translates as tilapia) nigiri and sashimi. And it’s difficult to imagine a true sushi spot selling diver scallops at the same rate as basic tuna or common shrimp.

Clearly the crowd they cater to cares little for semantics. Sashimi does not depend, as their menu claims, on a bed of supporting diakon.