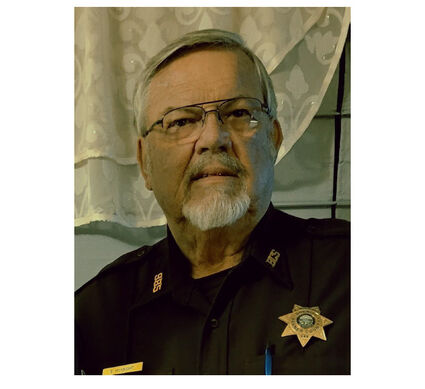 With great honor, the proud family of Stan A. McKnight, would like to officially announce his retirement after serving 47 years as a lawman. His bittersweet, last day in office was January 5th, 2023.

McKnight was born and raised in Osceola, Iowa to the parents of Eldon and Mary McKnight. He later met his wife of 58 years, Sherry Johnson, in the same community in which he retired.

McKnight's career began in Scottsbluff, Nebraska, as a patrolman in 1968. It was there that he was fortunate enough to work with the late Jim Livingston and Fred Franco. He talked highly of these two men who played a significant role throughout his career.

Highlights of his furthering career included that as Sheriff of Hayes County, where he proudly served six and a half years. During that time his deputy was the late Joe Nitsch. Not only did he trust this man with his life, but he also became one of his closest friends. Stan also paid great admiration to the local school principal, Gary Hastings. He credited him for his knowledge and interest in EMT, after completing his first course with him as the instructor.

For a brief time, McKnight took the opportunity to farm on his beloved Aunt's homeland, after her passing. Although he never regretted this career opportunity, it was also when he realized that his desire to work in law enforcement was where his heart was.

So in 1987 he returned to law enforcement as a deputy sheriff for Lincoln County. During which he served as the merit commissioner director for 19 years. In 2000, McKnight was presented with the honor of a purple heart for his bravery and injuries acquired while pursuing a known felon. McKnight was fired at four times and struck by two in the head and hand. His injuries required nine surgeries and he was restrained from working for twenty two months.

McKnight humbly stated that his biggest struggle was the enduring time it took to heal and the mental challenge to be well enough to continue his career as a lawman. With great determination to move past this horrific ordeal, his strength was both admirable and unbelievable.

He then went on to serve another six years for Lincoln County.

As life often comes full circle, McKnight was elected sheriff 20 miles from his career beginning location, in Banner County. This was also a very familiar place to him which he loved and was proud to serve and become reacquainted with the community. He served there from 2011 until his retirement date of January 5th, 2023.

When asking Stan about some of his proudest moments, he replied that the average life expectancy age of a law enforcement officer is only 67, and he has surpassed that already by nearly 10 years.

He also added that during his 47 years, he had never blown up an engine or wrecked his police cruiser. Lastly, McKnight would like to pass on to all officers, "just be safe."