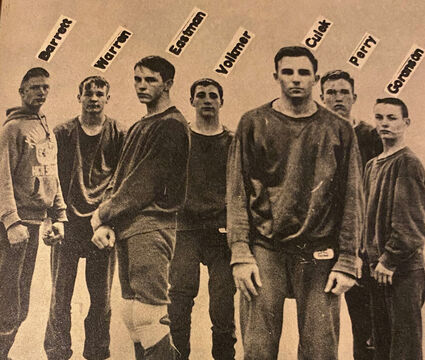 Say hello to the 1966 Kimball Longhorns wrestling team in this vintage Observer photo. Joe Culek, third from right, was a state champion that year at 145 pounds. And the other six wrestlers all qualified for State. Kimball High School's wrestling room will be named for him Jan.31.

In 1966, according to the Western Nebraska Observer's Feb. 24 edition, senior Joe Culek, at 145 pounds "took a state wrestling crown in Class B at Lincoln, leading the Kimball team to sixth in the state with a total of 31 points, collected by seven grapplers qualifying for the meet."

After an illustrious career wrestling in high school, Culek went on to wrestle at Chadron State College. Then he coached youth freestyle and high school wrestling in Kimball. His coaching career has spanned 30 years and hundreds of young athletes.

Perhaps his biggest thrill, even today, is that wherever he goes former wrestlers and opponents yell out, "Hello, Mr. Culek." They all remember him.

Culek will be honored with a ceremony and the naming of the Joe Culek Wrestling Room at Kimball High School on Jan. 31 at 6 p.m. before the Kimball/Burns dual wrestling meet.

Through wrestling, Culek said he learned "where a lot of hard work will get you."

Culek started coaching youth freestyle when his oldest son, Chris, was 4 years old – Chris is 50 this year. Freestyle was a favorite for Culek. "Freestyle teaches a lot of balance that can be used in high school wrestling."

Teaching wrestling moves was just part of the job. Culek said he wanted to instill in the young men a variety of principles or lessons, including respect, learning from your mistakes, the best parts of winning and losing, and, finally, "winning or losing.That's life," he said.

While Culek was the assistant coach in Kimball, success was measured by four state champions, five runners-up, 17 additional state wrestling medalists, and a third-place team in 1994. Culek coached in the high school from 1989 until 2012.

In 1965, as a junior, Culek took a chance and went out for wrestling, having never wrestled before. And it just so happened that he made it to state his junior year but came down with the flu during the state meet and didn't fair well during the competition.

At the state meet in 1966, Culek won by topping "three opponents in a row to take the championship in the 145 lb. Class," according to the article from the newspaper. "He pinned O'Neill's Jerry Nickerson in 3:41 to claim the honor, after pinning Maynard Rowan of Cozard in 4:56 in the semi-finals."

When Culek won the state wrestling championship in 1966, he was coached by Don Jones and Dick Strasheim.