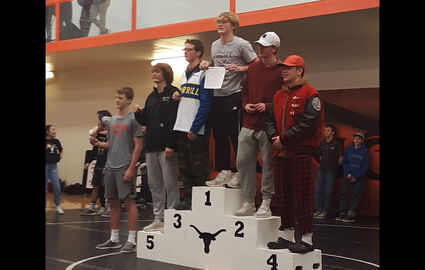 Trey Schindler stands tall after winning the championship at 152 pounds at the Chase County Invitational.

The injury bug has hit the Kimball Longhorn Wrestling team this week.

Derek Kauffman's season was ended in the beginning of the week with another shoulder injury that will result in season ending shoulder surgery. He finished the year with a 10-8 record at 170.

In the middle of the week, 106 pounder senior Matthew Johnson suffered a shoulder injury in practice that will sideline him for hopefully only a week or so.

Peter Russell suffered a chest injury at the beginning of the season, and we were informed that he will not be able to compete this season. This leaves just three wrestlers competing for the foreseeable future.

The Longhorns lost to Wauneta-Palisade, 24-18. Only one match was contested in the dual. Senior Trey Schindler won the lone match by pin in 0:16. James McGinnis and Cody Brinkman won by forfeit.

The Longhorns lost to Morrill, 24-9. Only two matches were contested in the dual. Senior Trey Schindler won a hard fought decision, 4-2, over Daniel Kohel, who is rated No. 6 in Class C rated. Cody Brinkman lost by pin.

The Longhorns lost to host Chase County, 57-6. Trey Schindler was the only winner in the dual. The senior won by pin in 1:55. James McGinnis moved up a weight class and lost a hard fought decision, 13-9. Cody Brinkman lost by pin at 132.

The Longhorn wrestlers then competed in the Chase County Invitational on Saturday, Jan. 14. With only two wrestlers scoring points, the team finished in 10th place with 61 team points. The tournament was won by the host school, Chase County, with 185 team points.