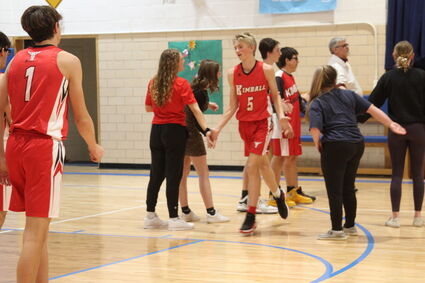 No. 5 Braxton Miller is emerging as a promising and productive freshman for the Longhorns.

The Kimball Longhorns boys basketball team was 3-9 on the season but continuing to battle hard following Monday's 50-47 loss to Perkins County in a first round SPVA matchup. SPVA action continues this Thursday and Saturday at NPCC.

Here's a look at the Horns' previous three games.

Visiting Potter-Dix jumped ahead 24-12 after a quarter, but Kimball came back to outscore the Coyotes 13-10 in the second quarter and 21-10 in the third and have a 46-44 lead going into the fourth quarter.

It was in the final quarter that Potter-Dix showed why it's been so strong the last few years, outscoring Kimball 20-11 to earn a 64-57 victory in the Jan. 10 contest.

For Potter-Dix, it was Luke Kasten with 27 points and Brayden Kasten with 21 leading the way, followed by Gunner Oleson and Zachary Rotert with 6 each.

The Kastens also led P-D on the boards and in assists, Luke with 11 rebounds and 5 assists, and Brayden with 6 boards and 4 assists. Rotert blocked three shots. In steals, Brayden Kasten had 5, and Rotert and Luke Kasten 4 each.

Leading Bridgeport were Kolby Lussetto with 17 points, Gage Nein with 13 and Nikolas Weibert with 11.

The Gordon-Rushville game on Jan. 14 was played without Kyler Lusche due to illness, but the boys played tough in his absence, Longhorns coach Chad Miller told the Observer.

"This game we knew we would have a little more difficulty getting inside shots due to the fact we were short one of our interior players and going against the 6-6 Western Trail Conference player of the year from a season ago," coach Miller said. "We were able to stay with them for about two and half quarters but down the stretch we just made too many turnovers and our shots just stopped falling.

"It was a good, hard fought battle both nights (against Bridgeport and G-R) and we were very pleased with our players and their efforts."