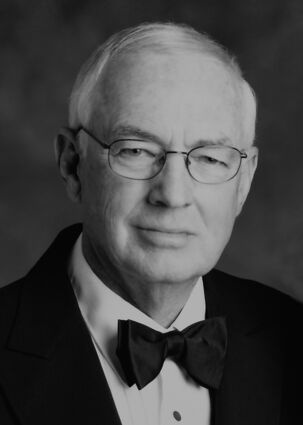 His family moved to Penwell, Texas, where his father worked the West Texas oilﬁelds before moving to Midland, Texas, where Reed was raised and attended Midland Public Schools. He graduated from Midland High School in 1951 and then attended the University of Texas at Austin, where he earned his BBA degree in Finance in 1955.

While at UT, he was a member of the Sigma Alpha Epsilon fraternity. Reed married Priscilla Ann Fields on December 31, 1953, in Midland, with whom he shared 69 years of marriage. She was his high school sweetheart and only true love.

Reed started his career as a landman with Moore & Gilmore in Midland. In 1959, Reed co-founded Antelope Energy Co. with his father, W. H. Gilmore, and brother, W. H. Gilmore, Jr. "Bill," and moved to Kimball, Nebraska. For the next 60 years, Reed and Bill were active in the oil and gas business in the Rockies and Permian Basin, where they operated many oil and gas properties, founded various oil and gas-related entities, and worked with many loyal employees.

While in Kimball, Reed founded Evertson Well Service with Bruce Evertson in 1974. He then founded Orbit Drilling Co. and Gilmore  Resources, Inc. in  Kimball,  Lakota  Drilling Co. of Midland, Adobe Drilling Co. of Odessa, Texas, and other related entities. Reed was a commissioner with the Nebraska Oil and Gas Conservation Commission, where he served as a member for more than 30 years. Reed also served on the Hastings College Board of Trustees and was an active member of local school and civic boards in Kimball. He also was a ruling elder of the Kimball Presbyterian Church. Reed was an avid ﬂy ﬁsherman and outdoorsman and enjoyed golf and skiing.

An accomplished high school athlete, Reed was voted Best All-Around Athlete at Midland High School and is perhaps best remembered as the holder of the Midland High football record for the longest interception return for a touchdown (100 yards) – a record that still stands today.

He remained a man of honesty, grace, and integrity throughout his life and career and was a devoted husband and father. Reed is survived by his loving wife, Priscilla; son Reed Gilmore, Jr. (LuAnn), of Boerne, Texas; daughter Valerie Griess (Lyle) of Spearﬁsh, South Dakota; daughter Joan Lindquist (Eric) of Omaha, Nebraska; son James Gilmore (Renee) of Fort Davis, Texas; brother W. H. Gilmore, Jr. of Midland, Texas, and seven nieces and nephews. Reed and Priscilla have been blessed with 11 grandchildren and 14 great-grandchildren.

Reed's unwavering service to his family, friends, employees, and business partners will continue as an inspiration to all who knew him.