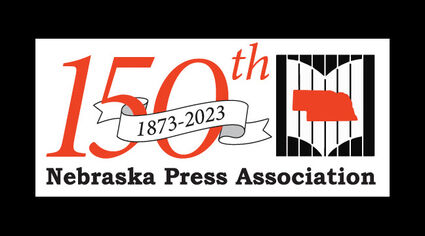 The Nebraska Press Association is celebrating its 150th anniversary in 2023, and Observer publisher Jim Orr helped create the logo that it will use all year to commemorate the milestone.

Orr won a contest among NPA members to design the logo. More than 20 entries were submitted statewide. Newspaper managers and staff, including graphic artists and advertising designers, were invited to enter.

Orr's submission added elements to the existing NPA logo for the anniversary year.

"It's a great honor for such a distinguished organization to consider the logo that I created to mark such an important milestone," Orr said. "I'm very proud and humbled."

Entries were presented for consideration July 22 to NPA/OnePress board members. OnePress is NPA's advertising arm.

"You'll be seeing the 150th logo constantly throughout this year," DeRossett wrote. "This logo comes from Jim Orr, publisher of the Western Nebraska Observer in Kimball. Jim receives the $150 prize for this winning submission; congratulations, Jim! NPA wants to thank Jim and all members who submitted entries in our logo contest."