Mayor 'Reading As Much As Possible' 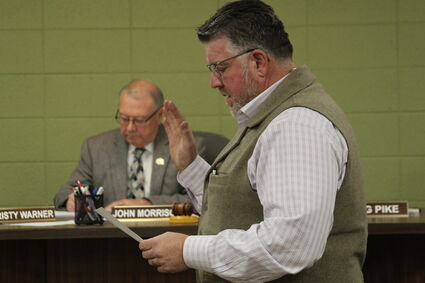 New Kimball City Councilman Donald Muench takes the oath of office earlier this month while new Mayor John Morrison looks on. At the Dec. 20 meeting, Morrison said he's reading up on his new job and Muench voted against a liquor license for a local business.

At the Kimball City Council meeting Dec. 20, Mayor John Morrison reported that he is trying to learn and "read as much as possible."

He said the city had been run well over the past years, and he stressed that an excellent job was done clearing the streets after the first blizzard this past month.

The council approved the renewal of the liquor license for the Panhandle Cooperative Association/Main Street market in a 2-1-1 vote. Council members Gabe Ingram and Christy Warner voted aye to approve the renewal while Don Muench voted nay, and Creg Pike abstained.

The next meeting for Kimball City Council is scheduled for Jan. 3 at 5 p.m. Morrison announced that he would not be at that meeting.

Morrison offered an opportunity for public comment, but no one commented.