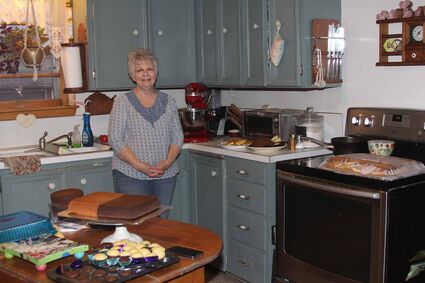 Judie Martin shows off an array of items she baked last week for others, but for herself, her favorites around Christmastime are Pepper Nuts, Soft Sugar Cookies and Caramels. She especially likes the Pepper Nuts recipe. It came from Bob's great-aunt. Judie told the Observer that her Soft Sugar Cookie recipe is a favorite of Karen Robinson.

Known throughout the Kimball area for her cooking and baking, Judie Martin reflects that she started cooking "out of necessity."

In 1974 when they, her husband Bob and herself, bought the A&W in Kimball, Judie said she wasn't very interested in cooking but began making the hamburgers at the A&W on west Highway 30.

Judie explained that things were off to a good start because Boeing was still in Kimball – "We thought we had a goldmine" – but when Boeing began to leave, reality set in and Judie said it was "a lot of hard work."

She reminisced that many women she sees in Kimball worked as carhops for them at the A&W 40 or 50 years ago.

Bob and Judie operated the A&W from 1974 until 1993, then they sold it, and shortly after panic set in. She recalled that "Bob said, 'What are we going to do now?'" At the time, Bob operated BJ's Bar. Judie's response was, "Well, you always wanted a steakhouse, and there is only one way to find out if it will work, try it."

Judie says that she learned to cook and bake from her Grandma and Mom, in addition to being self-taught. She admits to having made mistakes but learned from them.

That same philosophy helped the Martins through the years of business. It was hard work, but they continued to work hard to improve their business. Because they worked six days a week and went to Sam's Club on Sunday, she recalled that they "missed out on doing many things. We were tied to it."

Her favorite meals to fix are stew and chicken and noodles. Judie, referring to her cooking, said, "I don't have secrets ... Just so it tastes good."

After a remodeling, BJ's became a bar and steakhouse in 1994. BJ's, the downtown eating establishment run by the Martin family, operated until 2008 when Bob had surgery, and Judie knew she couldn't run it alone. Although her children always helped with the restaurant, she didn't want to tie them to that lifestyle.

At 81, Judie still does lots of cooking and baking, including cakes, cookies, sheet pies, berry crisp, and cupcakes. She makes many birthday cakes, wedding cakes, and pies for area celebrations. If you have eaten at a local restaurant, you have probably eaten one of Judie's pies.

Born in Birmingham, Alabama, when Judie was eight years old, her family moved to Colorado. She went to school in Colorado Springs.

She met her husband, Bob, and they eventually made their way to Scottsbluff, where he moved mobile homes. On one of his moves, he spotted the A&W in Kimball for sale. They met with Joel Weins and Ed Hogsett and purchased the eatery, moved and have remained in Kimball.

Any business owner will knows the hard work involved for a successful business, but Judie insists that it is important to learn from your mistakes and improve.