Hershey Next For Horns After Win At Morrill 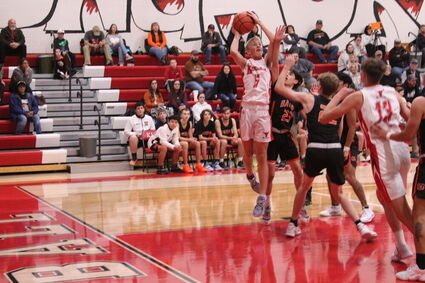 Kimball's Braxton Miller, a 6-0 freshman, looks to pop a jumper in the Bayard game. Teammate Brandon Paxton, this week's Clean Harbors Athlete of the Week, is at right.

The Kimball Longhorns boys basketball team hosts Hershey 6:30 p.m. Friday, Dec. 16, in a non-district matchup to close the 2022 portion of it season.

Kimball sits at second place in the district with a 1-1 record after its 68-31 win at Morrill on Saturday, Dec. 10. The Horns lost to Perkins County the night before, 59-47, and are 1-3 overall on the season.

Hershey and Kimball have played one common opponent thus far: Perkins County, and Kimball has fared a bit better. Hershey lost 63-42 at home and Kimball lost by a narrower margin at home, 59-47.

Multiple players have been making significant contributions for Kimball this season, and the Perkins County game was no different.

Lusche hauled in 11 rebounds to lead Kimball, and Paxton was next with 7.

Kimball's assist leaders were Braxton Miller with four and Paxton with 3.

Kimball won the first quarter, 25-12, and the third quarter, 21-0, which accounted for most of the point differential in this game.

Paxton led the Horns with both 25 points and 15 rebounds, and Lusche was right behind him with 23 points and 13 off the boards. Braxton Miller was the assist leader with 8.