Junior High Athletes Opted For Double Duty In The Fall 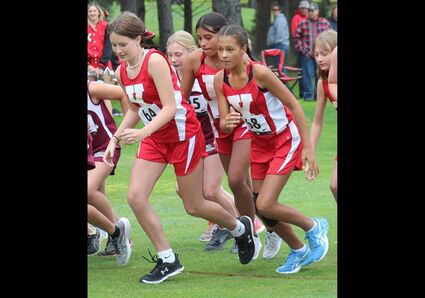 A handful of junior high student/athletes choose to participate in two sports in the same season. Completing one sport is an accomplishment, but two. The students spoke to the Observer during lunch period on Halloween day.

Each of the six double-sport athletics had unique and inspiring reasons for working and practicing doubly hard.

Kip Gillming's response was eye-opening and spot-on: "You can't hate something if you haven't experienced it." Kip, an 8th grader, thinks as a freshman, he might go out for cross country "because of the people."

Wyatt Cook is in his second year of doing both sports. He said, "I wanted to try cross country." His current plan is to do cross country as a freshman. According to Wyatt, the toughest meets are the courses with hills.

Emmaline Tabor, a 7th grader, played volleyball and ran cross country. She said, "I really like volleyball, and my mom told me I had to go out for cross country." She explained that she had a meet and a volleyball game on the same day. She said she really wasn't tired.

Also a 7th grader, Jaleigh Bohac went out for volleyball during school and played softball in a traveling league. The Monday through Friday softball practices were from 5:30-7:00 p.m., and then the games were on weekend. She simply said she liked both sports.

"Why not"? Trey Cook responded. He said he liked running but also liked playing football. As a freshman, Trey indicated he would go out for football, "Football, I enjoy it more." There was a cross country meet and a football game on the same day, he chose the football game.

And finally, Deanna Solis said, "I felt like my 7th grade year, I should try everything, and then I would know which sport to focus on." She admits she really likes volleyball.

An outstanding crop of junior high students with a great work ethic will keep Kimball High School athletics on the map.