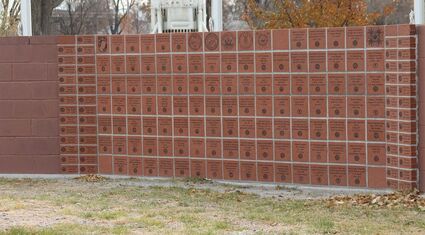 Bricks for the long awaited Veterans Wall in Gotte Park have been laid as a beautiful memorial to veterans whose families purchased bricks. Sales for additional bricks will begin soon, according to the Kimball VFW. A dedication ceremony scheduled for last Sunday was canceled and a new date has not yet been announced.

In 2000, Baker completed a deployment to the Bosnia and Kosovo NATO mission. In 2001, he deployed to Ethiopia, Eritrea, Djibouti, and Somalia Theater of operations helping train the Ethiopian Army.

He was promoted to lieutenant colonel in 2001. In 2004 he deployed to Iraq, where he helped develop the targeting systems needed to catch bomb makers.  In late 2004, Baker was promoted to the rank of colonel and graduated from the U.S. Army War College.

In 2005, Baker retired from the Army after almost 29 years of service. He has an impressive assortment of military medals and badges.  He once had basic proficiency in Arabic, Dari, German and Spanish.

"We are so excited that Tony Baker has accepted our invitation to speak to our area veterans during this very busy election time," said Jeri Ferguson, KHS civics instructor.

This year's program will begin Friday, Nov. 11 at 10 a.m. in the Harry McNees Auditorium. All Kimball-area veterans are asked to attend.

According to Ferguson, the Civics students have mailed out letters to area veterans inviting them to attend. However, she asks that if any veteran for some reason did not receive a letter, please plan to attend. She reminded everyone that this program is open to the whole community, so "please" come.

The Kimball School District is providing a complimentary dinner for all veterans and their spouses. The civics students will also help provide rides for any veteran who may need one. To make any of these arrangements, please call the high school at 308-235-4861.

Meanwhike, the City of Kimball offices, landfill and public library will be closed Friday in observance of Veterans Day.