Morrison In; Engstrom Out 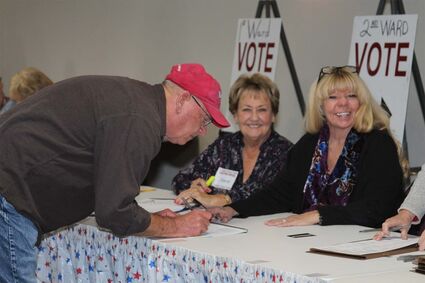 Kimball County poll workers Alene Schilz, center, and Cheryl Paul help a Ward 2 voter get his ballot in order to cast his vote. By midmorning Tuesday, the voting booths had a solid stream of voters.

The ballots have been counted, the election results are in and the local races – in Kimball County – have been decided.But until Nov. 16 when the county canvassing board meets, all results are unofficial.

In the City of Kimball mayoral race, John Morrison, with 480 outpaced city Councilwoman Christy Warner with 312, to lead the city for the next four years.

With only one individual on the ballot for two positions on the Kimball City Council, Creg Pike was elected to a four-year term with 612 votes. Two write-in candidates filed affidavits for City Council, with Don Muench gaining 203 votes over Kathy Porter's 63. Pike and Muench will take their seats on the city council.

One other city race was on the ballot but was uncontested as Gregory O. Stull attained a six-year term on the Airport Authority Board.

Voters elected three individuals to the Kimball School Board. Incumbents Travis Cook (816), Jennifer Griebel (651), and Tom O'Brien (612) were elected to four-year terms on the board. According to the resolution, fourth-place finisher Kenneth Smith will be placed on the board at the November meeting to complete Albert Hargreaves' term through 2024. Smith had 484 votes, and Carrie Tabor tallied 408 votes.

It was a late night for Banner County elections as write-in votes had to be looked at and hand counted.

Officials said they were counting votes late into the night due to the large number of write-in votes, and they expected to be keeping at it until after midnight.

The Observer will post Banner County results online as soon as they are available.