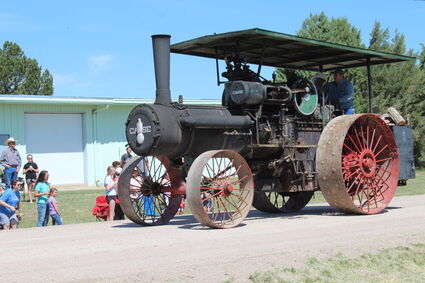 The steam engine tractors must be certified because they have a boiler.

The Case tractor has a top speed of 2.3 miles per hour.

Banner County Museum president Kurt Baker said, "Sometimes it would take them two or three days to move to the next place to thrash."

The tractor has to be certified every two years by the state boiler inspector, a division of the state fire marshal for the museum to operator it. It had been out of compliance, but with the leadership of Joel Cross, the tractor was re-plumbed.

This spring all new piping was installed and everything is up to specs according to Baker. He estimated that about 10-12 guys have over 600 man hours dedicated to re-plumbing the engine this year. The museum was able to purchase a copy of the original owners manual, which has a complete diagram and safety precautions.

Joel Cross and Norris Leafdale were both museum members when the steam engine tractor was purchased. Case sold its last engine in 1924.