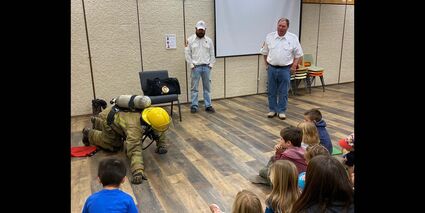 Kimball Volunteer Fire Department celebrated Fire Prevention Week with the Little Readers at the Kimball Public Library. Tyson Culek dressed in all his gear and showed how he would sweep the floor of a burning room with his hands. Exposure to the firefighter in all his gear will, hopefully, prevent children from hiding and being afraid of the firefighters who are there to assist them in an emergency. Above, Fire Chief Andrew Bohac looks on as firefighter Steve Watson explains what Tyson is doing.

Each year from Oct. 9 to 15, Fire Prevention Week is observed to commemorate the Great Chicago Fire, which started on Oct. 8, 1871.

Kimball Volunteer Fire Department visited and shared safety messages and materials with pre-schoolers and elementary students. The children were educated on the fire trucks, ways to prevent fire and "stop, drop, and roll."

KVFD concluded its day with a Fire Hall Open House on Oct. 12.

The public was invited to eat and "come see the fire hall and updated equipment."