By Jon Heidemann
For the Observer 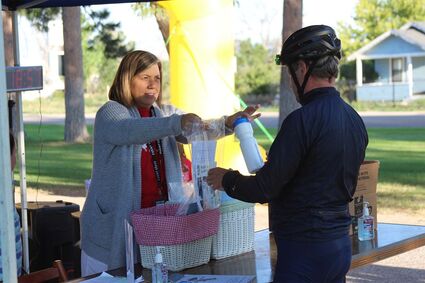 Courses of 100, 50 and 25 miles were offered and participants came to Kimball from Colorado, Wyoming and Nebraska.  Jon and Anna-Lisa Heidemann incorporated family friendly activities for spectators and local Kimball County residents with music, a BBQ and pie eating contest, kids bouncy houses and face painting, and kids bike and skate board raffles.

The 100-mile event left Gotte Park at 7:30 am, and traveled south from Kimball via county roads into Colorado. Once in Colorado, riders turned west along Weld County Road 136, entering Wyoming south of Pine Bluffs.  The riders traveled north and re-entered Nebraska making their way back by Oliver Reservoir and looping around the north side of Kimball before re-entering to finish in Gotte Park from the east.

The 50-mile event used part of the 100-mile course as it left Kimball at 8 a.m., cutting north before returning to Kimball by way of Oliver Reservoir and then Longhorn Road.

The 25-mile course left Kimball at 8:30 am in the same manner as the 50 milers, but instead of proceeding further south, it used Airport Road, returned via Oliver Reservoir and Longhorn Road before finishing back in Gotte Park.

Jon and Anna-Lisa Heidemann directed this event through their company, Peak to Peak Training Systems, located in Littleton, CO.  They direct other races in Colorado throughout the summer cycling season.  Jon is a local graduate of Kimball County High School and attended the University of Wyoming before becoming an elite competitive cyclist from 1990 to 2010, riding occasionally for the U.S. National Team and regional professional cycling teams.