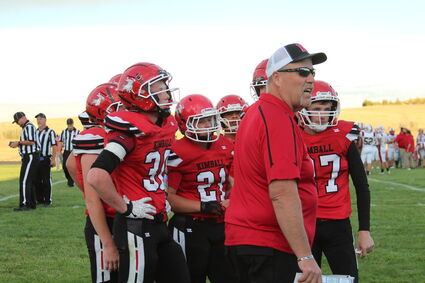 Kimball football coach Darrell Howitt's Longhorns are playing hard. They go for win No. 2 this Friday at Hemingford.

Another step forward in the Kimball Longhorns football program's comeback is within reach this Friday night at Hemingford.

"We've obviously had our struggles, but I think we've been improving slowly but surely," coach Darrell Howitt told the Observer. "With Hemingford, we have an opportunity to continue moving in the right direction."

Howitt said he considers Kimball, Hemingford and Morrill to be "in the same boat" this season, young teams looking to gain experience. He said Hemingord might be a "a little bit better" than Morrill, which Kimball beat 46-12 two weeks ago.

Kimball sits in third place at 1-1 in D1 District 11, followed by Morrill and Hemingford at 0-2.

The Longhorns and Bobcats stack up similarly for Friday's 7 p.m. game.

Kimball is 1-5 overall and Heminford 0-6, and both are coming off defeats by lots of points. Kimball fell 67-22 to visiting first place Bridgeport in a lightning shortened game last week, while Hemingford lost to second place Bayard, 80-34.

Howitt said a key for the Horns this week will be, as always, to "just take care of the fundamentals."

On offense, he said that focus needs to include good "ball security" – not giving up fumbles and establishing the middle run game as in the Morrill game.

"Do that and good things happen," he said.

After the first couple of games, Howitt said, the team has shown some better execution on the offensive side.

On defense, he said, "We continue to play dang hard." He said turning that effort into successful results depends significantly on simple, fundamental tackling.

Even during Kimball's biggest struggles early this season, Howitt said the older Longhorns, the seniors and juniors, have displayed a "good attitude" that makes him proud.

Howitt said he wants the juniors to "step up" next year and keep the program moving forward.

Those two juniors, Paxton and Kauffman, are among the team's statistical leaders so far.

At quarterback, Paxton through the first five games completed 3 of 10 attempts for 96 yards with 2 touchdowns and 3 interceptions and a 67.1 QB rating.

Sack leaders are sophomore Connor Deboot with 1.5, Kauffman with 1, and sophomore Hunter Funk with 1. Funk also has picked off a pass.