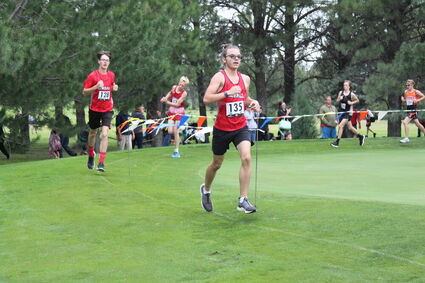 Xavier Thomas-Lewis of Kimball XC has been among the leading Longhorns runners this season and was one of the six who set PRs at Ogallala.

On Thursday, the Kimball cross country team will travel to Gothenburg, and then they run in the Western Trail Conference meet at Hemingford on Monday. Next Thursday afternoon, the runners travel to Grant for the SPVA.

In the varsity division at Ogallala and running against schools like Ogallala, Cozad, Gothenburg and Gering, leading the Kimball runners was Xavier Thomas-Lewis followed by Braylon Miller.

In the men's JV division, Jacob Wendt came in 32nd with a time of 23:05.6. Finishing out the Kimball team were Patrick Howard, Peter Russell, and Eddie Duran in 41st, 42nd, and 43rd places.