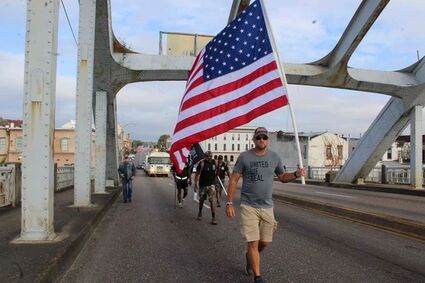 In October 2020, Kimball County native Jason Hanner crossed the Edmund Pettus Bridge in Selma, Ala., while he participated in the Buddy Watch Walk East. On Farmer's Day weekend, Hanner will begin his walk across Nebraska to draw attention to the mental health issues of veterans.

Kimball County native Jason Hanner will be taking a short detour from his walk across Nebraska to walk through the Farmer's Day parade on Saturday.

Although he won't be stopping for long because he has about 20 miles to walk on Saturday to get to Potter, each day he will walk between 20-22 miles until he has covered the entire state for his walk across Nebraska.

"If I can make a difference in someone's life or save one life, it will be worth it" Hanner said.

Now living in Omaha, Hanner will start on Friday at the Wyo./Nebr. border and head east on Highway 30 to continue his 460-mile journey. Some of his supporters will accompany him on the first segments of his trip. He said, "There is a certain level of crazy to do this."

After spending four years in the U.S. Navy, Hanner became aware that 22-25 veterans commit suicide daily. When COVID hit, the number of suicides among veterans climbed to between 30-35 daily due to the isolation created by the pandemic.

Hanner has participated in previous veteran walks throughout the country, and he knows that he will have to pack the necessities, keep his feet dry and be careful on the rural highways.

He is hoping to talk to people about mental health, listen to stories, publicize his walk and draw attention to the issue and raise money.

He plans to use his vacation time from his job to do as many miles as possible, then figures he will have three week-ends of walking to complete the final stage.

Estimated walking time for Hanner is three to three and a half weeks for his "Walk across Nebraska."