It's On To Ogallala, WTC For Kimball Golfers 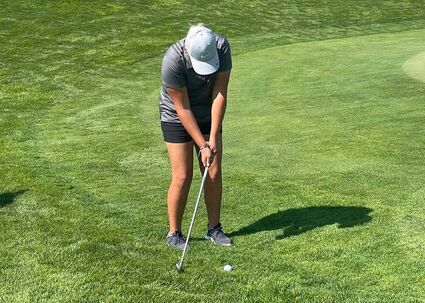 Freshman Aubrey Culek chips onto the green at Mitchell. Aubrey shot a 121 at Mitchell but was unable to compete at Gering due to illness.

Keara O'Brien shot a 107 in Mitchell to lead the Kimball Longhorns girls golf team to a fourth place finish with a 470.

Grace Anderson shot a 127, while Hayden Sours and Aubrey Culek both played steady with a 121.

On Monday, Sept. 12, with Aubrey Culek sick, only three Kimball girls headed to the Gering meet.

Keara O'Brien and Hayden Sours both shot 116 at Gering and Grace Anderson shot a 126.

The WTC tourney is Thursday in Bridgeport, and Oct. 3 is the District tournament here at Four Winds Golf Course in Kimball.