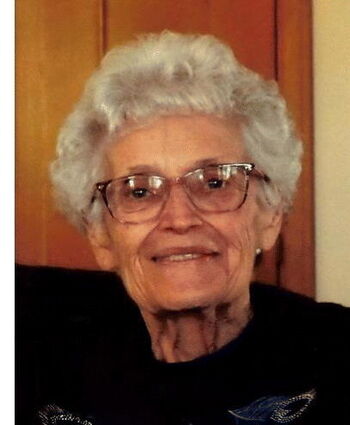 Carolee Egging, 87, of Gurley passed away Friday afternoon, September 2, 2022 at the Sidney Regional Medical Center- Extended Care. Services were held Thursday, September 8, 2022 at St. Patrick's Catholic Church with Concelebrants being Fr. C.P. Varghese and Fr. Martin Egging along with the Priests of the Grand Island Diocese. A memorial has been established to St. Patrick's Rummage House. Holechek-Bondegard Funeral Home and Cremations in Oshkosh and Chappell is serving the Egging family. Family and friends can leave condolences at http://www.bondegardfunerals.com.

Carolee Marie was born January 13, 1935, in Kimball, Nebraska to Albert and Helen (Kirchner) Janicek. She was one of 10 children. She grew up in Kimball and attended Kimball County Schools, graduating in 1953. She began working as a telephone operator in Kimball. This job took her to Durango and Denver, Colorado and back to Sidney, Nebraska.

In 1960, she married Lawrence Egging of Gurley. To this union 3 children were born: Martin, Carmen, and Kent. She became a full-time farm wife and mother. Carolee loved to cook and bake, especially glazed donuts and cinnamon rolls. Every year she would grow a garden and can all her produce. She was very active in her church and spent many hours volunteering at the Rummage House. She was a minister of Holy Communion.

She is survived by her husband, Lawrence of Gurley; children, Father Martin Egging of Grand Island, Carmen and husband Steve Draper of Dalton and son, Kent Egging and friend, Terry Loftus of Gurley; 1 granddaughter, Samantha and husband Keelan Halvorsen of Ketchikan, Alaska; brothers, Derald Janicek of Hot Springs, Arkansas and Duane and wife Fran Janicek of Kimball; a host of nieces, nephews, cousins, and friends.

Carolee was preceded in death by her parents; brothers, Donald, Dale, Dick, David and Dan Janick, sisters, Pat Glenn, Betty Janicek and Alberta Brown, and other family members and friends.