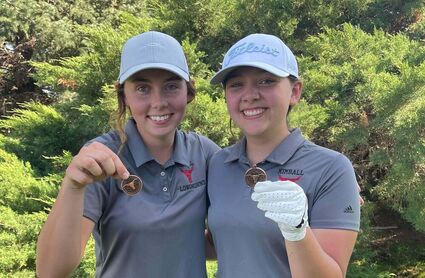 The Kimball girls golf has been busy with four meets already completed by Thursday this week. Last week, Kimball competed in Sidney and Bayard. Tuesday they were at home in Kimball, and Thursday was a date at Creek Valley.

At the Sidney Invite, Scottsbluff took the top four spots with Scottsbluff's Anna Kelley shooting a 71 to win the tournament.

In Bayard, at the Chimney Rock Golf Course, Keara O'Brien shot a 113 and chalked up ninth place, Grace Anderson took 12th place with a 116, Aubrey Culek shot 129 and Hayden Sours was at 132.

Mallory Hottell was added to the team and will play at t...