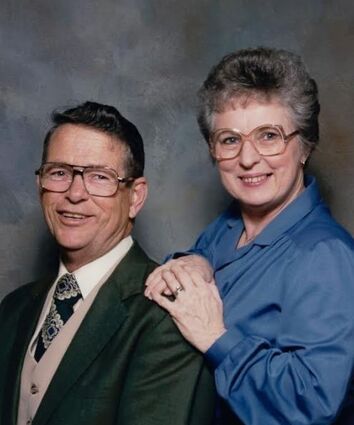 Rosary service will be held at 9:30 a.m. and the Mass will be held following the Rosary at St. Joseph's Catholic Church in Kimball on Saturday, September 3, 2022, with Father C.P. Varghees officiating. Inurnment will be held in the Kimball Cemetery.

Friends may visit http://www.cantrellfh.com to leave condolences and stories for the family. Memorials may be given in her memory to the Kimball Friendship Center. The services for Rita have been entrusted to the Cantrell Funeral Home.

Rita was born, March 21, 1929, to Leddy and Joe Heille in Wadena, MN, in the front bedroom of her maternal grandmother's (Theresia Kraemer) home.  She graduated from Edison High School, North East Minneapolis, with the class of 1946.

Rita grew up during the depression along with rationing during WWII, in Minneapolis.  She met her future husband, John Maginnis, who was visiting his sister there; they married and moved to Sioux Army Ordnance Depot, NE.  They then moved to Kimball, NE, where Rita took a part-time job with Dr. Shamberg; however, she stayed on full-time, where Dr. Shamberg personally trained her to be a nurse, both lab, and X-ray technicians.  As various doctors came and left, she stayed on.

When asked what she wanted to be remembered for; she simply said, "How I confidentially loved serving my community as a nurse and for the great appreciation I have for all the love that was returned to me."

Rita enjoyed going places in the tristate area with the Red Hatters.  She sang in the St. Joseph choir, while also being a lay Eucharistic Minister and lecturer there.  She also sang with a tri-county choir who performed at the Rockefeller Center Radio City Music Hall, in New York City (where her favorite, "the Rockettes" perform).

She delighted in being a state of NE host, at I-80's Eastbound Visitor Center.  She found the companionship of the Kimball Friendship Center and being a quilter there most gratifying.  She was truly grateful to the citizens of Kimball for welcoming her, a city girl, and especially the two honors of being presented with the key to the city (December 1999) and as the Neighbor of the Year (Farmer's Day 2022).

She was preceded in death by her parents, brother Bernie and husband John.