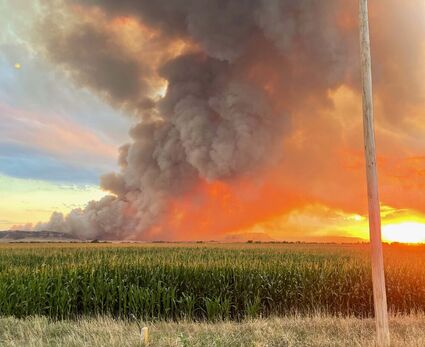 A large wildfire south of Gering destroyed three homes as August began on Monday and damaged several others as it continued to spread through the dry vegetation in Nebraska’s Wildcat Hills. As of Monday afternoon, aerial surveillance showed the Carter Canyon Fire to be at 15,591 acres, an increase from 13,051 acres yesterday due to significant wind-driven runs. The fire remains at 30 percent contained, not because of lost containment line, but increases in acreage.

“Fire managers are expecting to see increased containment over the next few days. Pockets of timber will continue to burn until we receive adequate moisture,” said Public Information Officer Ben Bohall of Nebraska Forest Service. “Residents can expect to see smoke, but this is strictly coming from the interior.”

Crews were dealing with increased wind gusts and shifts, as well as near 100-degree heat.

Wildfire is heavily impacted by wind, which can change conditions on the ground constantly. It removes damp air, speeds up the drying of fuels, and facilitates combustion by boosting the oxygen supply once a fire has been ignited. It is also a major factor in determining a fire’s rate of spread.

Passing aircraft reportedly witnessed the fires igniting due to lightning strikes, and smoke was first reported about 6:30 p.m. on Saturday. First responders reported two separate fires in the Cedar Canyon Wildlife Management Area and Carter Canyon public lands. Firefighters engaged immediately, but were hampered by heavy timber, rough terrain, and wind-driven runs. Within hours, both fires had substantially increased in size and merged.

Fire managers recognized that structures were in danger and began establishing protection along Cedar Canyon Road.

The fire made a significant run through the Cedar Canyon Estates, destroying three primary residences, damaging other outbuildings, and agricultural assets. Law enforcement and fire managers are still collecting information and performing damage assessments. Several power lines and poles in the area were downed, leaving residences without power. Utility workers have since been working to bring power back online for all those who were impacted.

Officials issued mandatory evacuation orders yesterday along Cedar Canyon Road. Most property owners have been allowed to return since. There are currently no injuries or fatalities reported.