Five Longhorns And A Coyote On The National Stage In Michigan 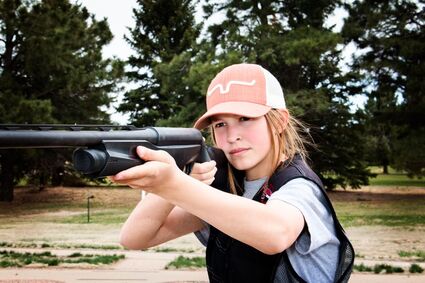 Trap shooter Kambree Hottell is among the Longhorns competing at Nationals this week in Michigan.

Kimball Longhorns trap team members and a travel partner from Potter-Dix are competing this week at Nationals in Mason, Mich.

Brittany Cook, one of the Longhorn coaches, told the Observer that Thursday, July 7, is a practice day for the Panhandle delegation.

Then it's down to business.

The Longhorns will shoot as a team Friday. Next, on Saturday, they'll shoot individually along with Monheiser. The championship rounds are Sunday.

"We will know the night of the ninth (Saturday) if any of the kids made it to the championship rounds, or if our team made it," Cook said.

A reverse run is used to break ties. The count begins with the last shot of competition back to the first missed clay.

Schutz was awarded All-State trap honors due to his outstanding season average of 20.3 out of a perfect score of 25.