On To Week 6 For Women's Golf Association 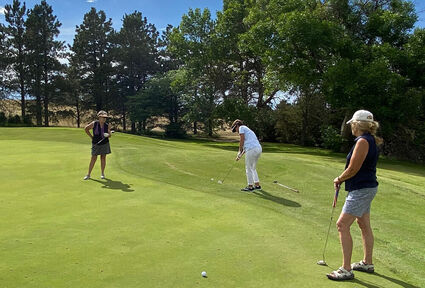 The Kimball Women's Golf Association held its mid-season league nine-hole tournament in Week 5. At left, Phyllis Greenwood and Franny Haukrap watch CharlottaYoung chip onto the green on the third hole.

Payton Wise shot a 46, which won low gross, and low net winner was Dar Evertson with a 33.

Week 5 was the mid-season league tournament. In the championship division, Payton Wise shot a 44 to win low gross.

Other low gross scores were: First flight, Charlotta Young with a 47; Jean Barrett shot a 49 in the second flight; Jan Bashaw won the third flight with a 53; and Regan Hinton had a 58 to win the fourth flight.

In the championship flight, Pattie Klinginsmith picked up the first place low net with a 40, followed by Shellon Anderson in second place with a 44.

Week 6 for the Women's Golf Association play will be match play on the back nine.