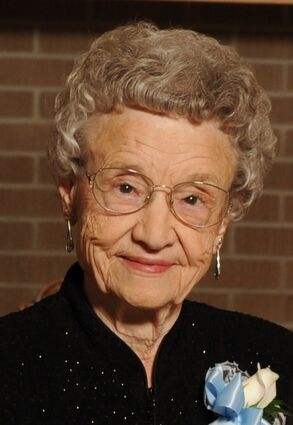 She was born September 8, 1920, at the family farm in Banner County, Nebraska, to Floyd Leland Barrett and Minnie Mae Reed Barrett. She attended grade school at District 13 in Banner County and attended junior high and high school in Kimball, Nebraska, graduated as valedictorian from Kimball County High in 1937, received her Bachelor’s degree from Chadron State College Teachers College in 1940 having majored in Business Education with minors in Latin and English. She served as president of Gamma Chi Omega, was homecoming queen, member of the College Chorus and of Cardinal Key Honor Society.

She taught business and Latin at Chugwater, Wyoming for two years and one year at Holdrege High School, Holdrege, Nebraska. She then returned to Charon State College as the secretary to the president for three years. She married Marvin Sandberg February 24, 1946 when he returned home from World War II and they made their home on a wheat farm near Albin, Wyoming.

Bertha was a member and past secretary of American Legion Auxiliary Boyce Marlatt Unit 77. She enjoyed traveling, community clubs, crocheting, knitting, Swedish weaving, reading and quilting. Most of all, she enjoyed family get-togethers on all the special occasions.

She is survived by her son, Terry (Joanne) Sandberg of Albin; grandchildren, Julie (Tim) Read of Dickinson, Texas, Lori Sandberg of Pearland, Texas, Carol (Blake) Lindell of Round Rock, Texas, and Craig Gossett of Dallas, Texas; great-grandchildren, Emmett, Savannah and Robin of Round Rock, Texas, and Ryan of Dickinson, Texas; son-in-law, Jim Gossett of Granbury, Texas; and daughter-in-law, Gretchen Papka of Cody, Wyoming.

A visitation was on Tuesday, July 5th from 6:00 to 8:00 p.m. at Schrader, Aragon and Jacoby Funeral Home.  A memorial service was on Wednesday, July 6th at 10:00 a.m. at the Schrader, Aragon and Jacoby Funeral Home with a luncheon following at the Schrader Reception Center, 2222 Russell Avenue, Cheyenne. Interment followed in Kimball Cemetery at 2:00 p.m.

Donations on behalf of Bertha may be made to the Albin Fire Department/Rescue Unit, Albin Wyoming.