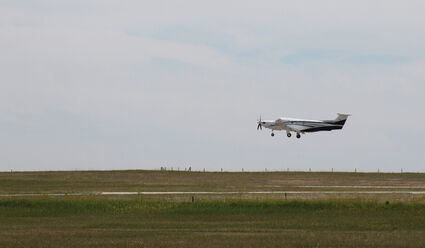 A Pilatus aircraft takes off on Monday afternoon from the Kimball Airport. The aircraft used Kimball's one and only 6,000-foot runway. Preparations are in the works for the resurfacing of the runway, which will be closed for up to 280 days.

LINCOLN – About $4.3 million in federal grants through the Federal Aviation Administration's Airport Improvement Program were awarded this month to two Nebraska airports, – Kimball Municipal/Robert E. Araaj Field and Sidney Municipal/Lloyd W.Carr Field, according to the Nebraska Department of Transportation.

This second round of fiscal year 2022 improvement program grants included $3.7 million to rehabilitate the runway at the Kimball Airport.

The Sidney Airport received $674,239 to rehabilitate the hangar.

"These airport improvements in the Nebraska Panhandle will allow the Kimball and Sidney airports to continue to be effective economic drivers to their communities," said Ann Richart, director of the Aeronautics Division of NDOT. "We appreciate the support of the Federal Aviation Administration in recognizing the important regional benefits of these investments."

Nebraska's grants were part of more than $518 million in supplemental funding for 416 infrastructure projects to airports in 50 states plus Puerto Rico and the U.S. Virgin Islands. AIP projects promote safety, efficiency, environmental stewardship, infrastructure, and security at the nation's airports.

The FAA has awarded a total of $1.1 billion of the $3.2 billion total funding available in Fiscal Year 2022.