SHE SHOOTS, SHE SCORES 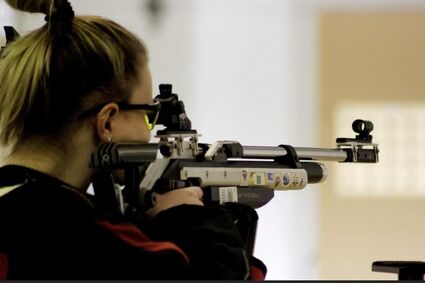 Julia Winstrom has this to say about her shooting: "I just know I have a job to do and that's ... win."

What began as an 4-H activity for an 8-year-old continues today for 17-year-old Kimball High School junior Julia Winstrom. Julia will compete in two national air rifle competitions over the summer, one in Ohio and one in Colorado.

According to Julia, "I go into any shoot and forget everything that has happened and I just focus on shooting. Sometimes when I'm mad I just take my anger out, tends to make me shoot better. I just know I have a job to do and that's . . .win."

From age 8 to 15, Julia shot BB guns with the Dead Eye Shooters. Coach Nicole Snyder stressed the skills that they acquire in this popular event – "competition, concentration, patience, and they develop mental aspects as well as physical."

Julia also explained what she has learned from the sport: "I've learned that no matter how you do at a match, you will always have people watching you and motivating you. The younger shooters are looking up to me and I love being that role model to motivate kids to not give up. I've not only made some great friends through shooting but I've made a family."

On June 24 and 25, Julia will compete at Camp Perry, Ohio, in the National 3PAR (three positions, prone, standing, kneeling air rife competition). Day 1 is the 3PAR Junior Olympics Championship. Julia uses a Crossman Challenger Sport Air Rifle that shoot pellets with compressed air – a gun that "can't be highly modified" under the rules. Julia qualified for the event by shooting 535 points, which was the third highest score in the state of Nebraska.

Day 2 at Camp Perry is the Civil Marksmanship Program. Both days the competitors shoot 20 shots from three positions, and the top eight shooters make the finals. One hundred and 12 shooters were invited, and Julia ranked 47th.

Then in July, Julia will spend a week at the Olympic training facilities in Colorado Springs to complete in the American Legion Postal Shoot. For this event, Julia shot locally, sent the scores in and qualified; she placed in the top 15. Once in the Colorado Springs, Julia will have to qualify again to go to the second round and hopefully the finals.

Many top athletes have good luck charms but Julia said, "I don't have any good luck charms. But I have three of my biggest supporters that follow me around, my dad, mom and Grandma Barb."