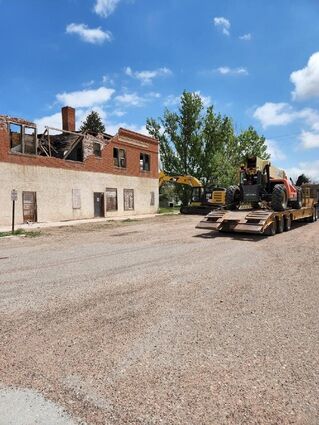 Staci Magninie for the Observer

Demolition work begins Tuesday to raze a wind-damaged old building in Dix that became an unsafe eyesore after an April wind storm.

Members of the community of Dix were up in arms about the need to remove a damaged building in downtown Dix, but then demolishment of the structure began Tuesday.

The former multistory commercial building at 123 Myrtle Str. sustained substantial wind damage in early April during a wind storm and suffered a large hole in the south side wall.

The building, about a century old, was not repairable and a number of residents wanted it demolished.

The Village of Dix also asked the owners to demolish the building.

According to Kimball County records, the owner of the building is De La Grande Con...