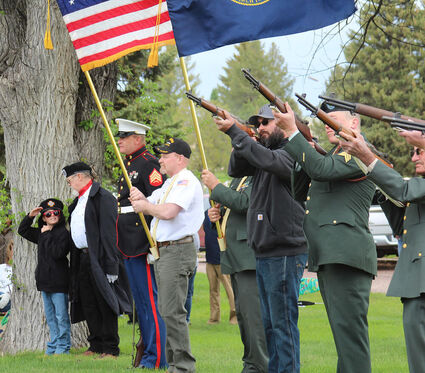 Alex Price, 9, salutes while the military honor guard presents a 21 gun salute during the Memorial Day ceremony at Kimball Cemetery. Alex was at the cemetery with his "papa," Army veteran John Beatty.

Lt. Col. Eric M. Green from F.E. Warren Air Force Base in Cheyenne was the speaker for Memorial Day 2022 ceremony at the Kimball Cemetery.

It was a chilly and windy day as Matt Shoup, VFW Post 2243 commander, opened the ceremony. Randy Bohac gave the opening prayer, and Eileen Rowley from the VFW Auxiliary placed a wreath at the veterans memorial. The Pledge of Allegiance was recited, and Tom O'Brien sang a beautiful rendition of The Star-Spangled Banner.

The honor guard presented their salute, and Taps was played by Jayden Paxton.

Following the ceremony at the cemetery, VFW Post 2243 treated guests to a hamburger feed.