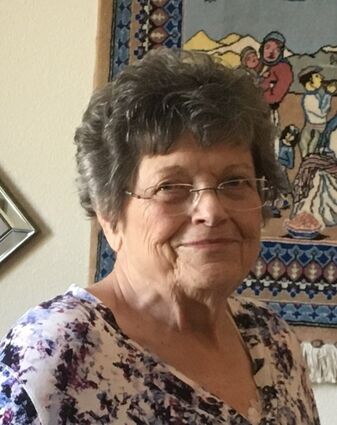 Joan Palmer Wood, 91, passed away Thursday, May 12, 2022, in Kimball, NE. Cremation has taken place, and her memorial service will be at 9:30 a.m. on Tuesday, May 31st, at Cantrell Funeral Home with Roger Gillming officiating.

Fond memories and expressions of sympathy may be shared at http://www.cantrellfh.com. Memorial gifts may be given in care of the family or to Samaritans Purse, or the Arthritis Foundation. Cantrell Funeral Home is in charge of the arrangements.

Joan Beatrice (Stewart) Palmer Wood was born in Sterling, Colorado, on February 20, 1931, to Charles and Lois (Duncan) Stewart. Joan attended 7th and 8th grades at Brownson, NE and graduated from Sidney High School in 1949. She then worked as a telephone operator for Bell Telephone. She married William Palmer in 1951, and they had four children together and later divorced. In 1973, Joan married Murel Wood and lived in Kimball.

Throughout her life, she worked in the radio broadcast industry, including KSID in Sidney, KIMB in Kimball, KRLN in Canon City, Colorado, and KWBE in Beatrice, Nebraska. Joan had worked for Warner Broadcast from 1971 to her retirement in 2010. Joan was a well-respected boss, community leader, and the epitome of classy. She will be remembered in fond memories of family bingo planning, organizing community events, and her deep-rooted faith.