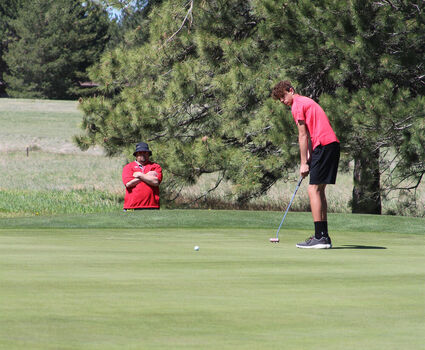 After a perfect drive on the first hole at District, Kyler Lusche putts on the the first green. He went on to win District at Four Winds, the Longhorns' home course, and qualify for State.

On Thursday, freshman Kyler Lusche was just getting warmed up for Monday's District golf meet.

At the Kimball Invite on Thursday, Lusche shot a 77 for second place on the Four Winds course, but he outdid himself on Monday shooting a 75 and nabbing first place.

Zaybreon Hansen from Perkins County placed second with a 78. Hemingford's Dax Powell was third with an 82.

In an interview by Kaitlin Heeg for the Observer, Lusche said he wanted to shoot in the mid-70s and he accomplished that goal. Nearing the end of the round, Lusche said, "I felt pretty good, I was pretty calm about everything."

Lusche said his best hole was #14: "I hit it on in two and had an eagle putt, and I just missed it for a tap-in birdie."

Lusche is looking forward to State golf. He said he was going to continue practicing.

The state tournament is in North Platte next week.

On Thursday, Bransyn Kiefer shot a 99, Landon Norberg shot a 114 and Conner Deboodt had a 116.