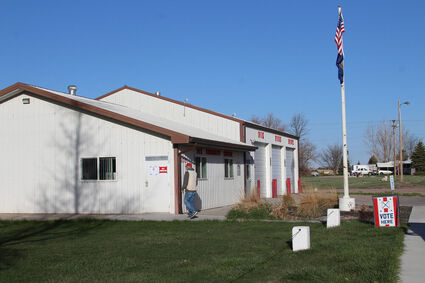 Shortly after the polls opened Tuesday for the primary election, Kimball County Commissioner Larry Engstrom cast his ballot at the Dix Fire Hall. Results remained unofficial Tuesday night and are expected to be certified Thursday.

The GOP primary determined the winner because no other candidates sought the office.

The unofficial results as of 9:20 Tuesday night were Hottell with 431 votes and Gillway with 413, County Clerk Cathy Sibal told the Observer. Results by precinct weren't immediately available.

The county's Josi Morgan said 186 early ballots were requested, six were not returned, and one ballot was considered provisional.

By 7:30, the first of the five precincts, Bushnell, brought its results from the DS 200 voting machine. The results came via a USB and a paper copy.

Voting in the May 10 primary election of 2022 concluded at 7 p.m. Tuesday. It took just more than two hours to run the tabulations on the voting machines and total all the votes for Kimball County.