Thank You For Being A Friend, Air Force Says 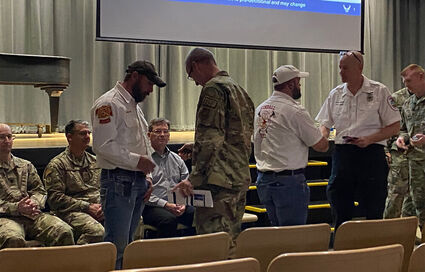 Kimball Volunteer Fire Chief Andrew Bohac, left, assistant chief Mark Whetham and members of other emergency response departments were recognized and thanked by the Air Force for assisting during the Humvee incident.

An Air Force Humvee with explosive hazards caught fire as it traveled south on 71 at mile marker 23. There were no injuries.

According to 90th Missile Wing Public Affairs, a team from the 90th Explosive Ordinance Disposal detonated ammunition and grenades that were not able to be removed from the burning vehicle.