All Systems Go To Start 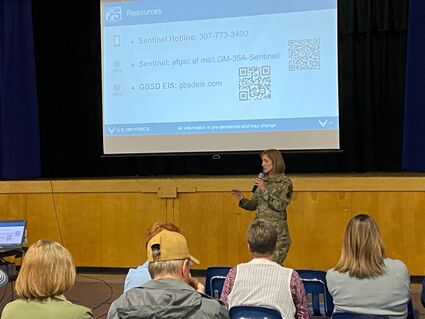 The 1970s-era Minuteman III Missiles will be replaced in the next few years by the Sentinel Intercontinental Ballistic Missile system, which the Air Force describes as a more cost-effective option.

According to officials at the Air Force Real Estate Meetings in Kimball and Banner counties, the Minuteman III was built for 10 years of service, but it has been on alert for 50 years and is aging and cost-prohibitive to operate.

The Sentinel: Officially known as LGM-35A Sentinel, it will be operational until 2075, making our "nation stronger and more secure," the Air Force states.

Col. Catherine Barrington, commander of the 90th Missile Wing at F.E. Warren Air Force Base, said that the name Sentinel reflects what the airmen do: "Stand watch, on alert, and guard your country." In a release on April 5, the Secretary of the Air Force, Frank Kendall, approved the system and said, "All the time, the Department of the Air Force has kept the watch; always vigilant and ready. The name Sentinel recognizes the mindset that thousands of Airmen, past and present, have brought to the deterrence mission and will serve as a reminder for those who operate, secure, and maintain this system in the future about the disciple and responsibility their duty entails."

The design of the Sentinel weapons system is not final but it is being tested at Vanderburg Space Force Base in California. The ICBM Sentinel was preceded by the Minuteman, Peacekeeper, Titan and Atlas.

It should be noted that the Air Force repeated this over and over again at the recent Real Estate Town Hall meetings: "All information is pre-decisional and may change."

An Air Force goal with these meeting is to be proactive and "identify all concerns and to be good partners." Landowners will be dealing with the U.S. Army Corps of Engineers to negotiate transactions. The Air Force will need a temporary right to access and construct, along with re-use of existing utility easements; there will also be new easements and tower sites.

The tentative locations for the 300-foot towers include one in Kimball County and four in Banner County, and towers require a five-acre site.

While the meeting was explicitly for landowners who might be affected by the proposed GBSD project, the Air Force shared information on other topics. These included project schedule, the Environmental Impact Statement, and the WorkForce Hub.

Here's the monthly 2022 schedule for the Sentinel:

In 2024, the Workforce Hub will start construction, by 2025 the workforce will begin, and by 2026, heavy construction will start.

The security clearance employees housed in the workforce hub area usually work 10-hour days, six days a week for periods of 6-8 weeks at a time, then return to their home for two weeks. The electricians, plumbers, welders and other skilled workers will have bus service to their employment sites.

The Sentinel will replace the 400 Minuteman III operating at F.E. Warren Air Force Base in Cheyenne, Wyo., Malmstrom AFR in Montana, and Minor AFB in North Dakota.

The Air Force, to ease community, says that both the Minuteman III and Sentinel weapon systems "using infrastructure at current locations will allow the systems to continue meeting all nuclear surety and safety standards during the transition period."