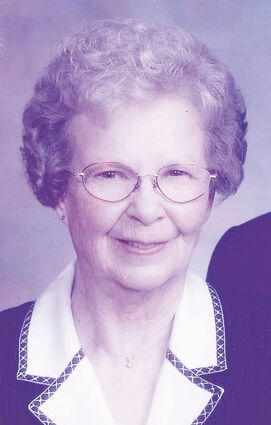 Visitation was offered on Thursday, April 7, from 1:00 to 6:00 p.m. at Cantrell Funeral Home. Her funeral service was at 10:00 a.m. on Friday, April 8, at Trinity United Methodist Church with Pastor Roger Gillming officiating.

Memorials have been designated to Trinity United Methodist Church or St. Jude Children's Hospital. Fond memories and messages of sympathy may be shared at http://www.cantrellfh.com. Cantrell Funeral Home is in charge of the arrangements.

Joyce June Vencill Maxted was born October 16, 1930, in Kimball, Nebraska to Lloyd M. and Ruth (Tomlin) Vencill. She was the fourth of five children. When Joyce was in the fourth grade, the family moved from the farm north of Kimball into town. While attending Kimball High School, Joyce met her future husband, Don Maxted. Joyce graduated from Kimball High School in 1948.

Joyce and Don were married February 4, 1949, and resided in Cheyenne, WY and Omaha, NE prior to his honorable discharge from the United States Air Force in August 1952. They then moved to Ree Heights, SD to farm with Don's father and brother. Their daughter, Sue Ann, was born June 25, 1955 in Miller, SD. The family moved back to Kimball in August and have resided here ever since.

Joyce worked at JC Penney's, World Insurance in Omaha as a claims transcriptionist, American National Bank, Kimball County High School in the hot lunch program, and at Larsen's Jewelry. In 1987, Don and Joyce, along with Jack and Joan Lockwood opened a branch office of Century 21, Bitner-Warner Realty, Inc. in Kimball. When Don retired from Century 21, Joyce continued to help him in his real estate business, Maxted Realty.

Her primary role, however, has always been that of homemaker. She was always willing to help with class parties as a room mother, with Blue Birds and Camp Fire Girls, Sunday School and Vacation Bible School, as a junior class parent, and with Job's Daughters.

Joyce was a 65-year member of Trinity United Methodist Church, serving on various committees and working on many projects in the church. She was a member of Wesleyan Circle and served many funeral dinners. She was also a Past Honored Queen, Majority Member and Past Council Member of Bethel 12 of the International Order of Job's Daughters, and a 60-year member of Truth Chapter No. 262, Order of the Eastern Star. Joyce was also a Kimball Chamber of Commerce Ambassador, a volunteer kindergarten grandma at Mary Lynch Elementary and helped with the all-school reunions in Kimball.