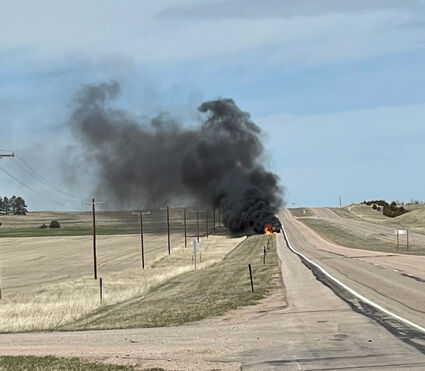 A military Humvee loaded with explosive weapons burns Monday along Highway 71 north of Kimball after an accident in which some explosive detonated. Below: This Air Force serviceman on Monday stopped traffic heading north on Highway 71 at the Kimball exit. Vehicles going to Sidney were told to take a detour on 385 north.

A team from the 90th Explosive Ordnance Disposal flight assigned to F.E. Warren Air Force Base, Wyoming, was deployed to this area to conduct a series of controlled detonations on Tuesday, April 12, to render the scene of a totaled Humvee safe following a fire while the vehicle was transiting Highway 71 near Kimball on April 11.

Residents were told that they may hear several detonations throughout the day. However, due to windy conditions, detonations weren't held Tuesday.

Nebraska State Patrol closed the highway in the interest of public safety.