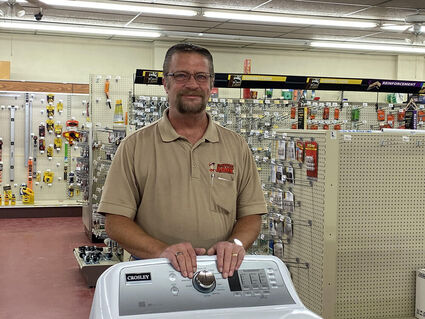 Hometown Hardware's Rich Patterson shared some of his thoughts with the Observer about competition and the history of his hardware store.

Rich Patterson from Hometown Hardware says he sees the new Kimball Ace Hardware store as a benefit to everyone – including his business.

"Competition is good," Patterson said. "There is nothing wrong with competition. It will be beneficial for both of us and the community. It will keep people in town.

As for the future, Patterson indicated that they "may diversify back into major appliances," and he is confident that he can compete with Home Depot and Lowes.

Going back a few generations, James and Vonnie Bourret purchased Morris Hardware and LP Gas Co. in 1951. According to the book "Kimball County History 100 Years" they operated Bourret Hardware for 23 years in the exact location as Hometown Hardware. James Bourret served as Kimball's mayor, the county judge, a county commissioner and a city councilman.

Patterson reminisced that his aunt and uncle were married by Judge Bourret "right in the hardware store" and signed their marriage license there.