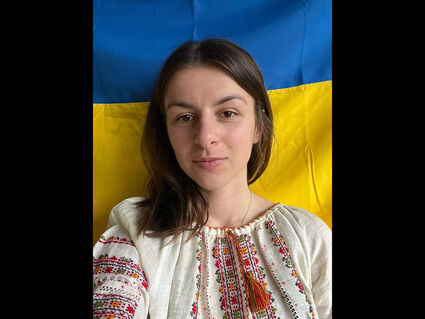 University of Wyoming student Anastasiia Pereverten from Ukraine wears traditional clothing from her homeland while sitting in front of the Ukrainian flag.

A young woman left her home and family in Ukraine to study abroad at the University of Wyoming in January.

But just about a month after arriving in the United States, Anastasiia Pereverten said, "The war is happening. I was shocked during the first 20 minutes of the whole-scale war on the 24th of February. Later, gradually comes the recognition of the war destroying your homeland and killing thousands of civilians.

"I cannot describe this feeling, but 'shock' is too weak for that. It is interchanging hatred, grief, anger, despair, fury, pain with constant faith in Ukraine, Ukrainians, and our army and confidence in victory. Thankfully, Ukrainians resolve all of those feelings with actions – supporting our army, fighting for Ukraine, and helping each other."

In 1991, the old Soviet Union collapsed, and Ukraine was one of the 15 countries which arose out of the dissolution of the Soviet Union. Ukraine is about the size of Texas, with a population of 43 million. Most of the population lives in the 29 largest cities.

According to Anastasiia, Ukrainians were "pretty much assured, Russia would not invade." She continued, "We used to think it was just political or intimidation of the international community."

While Americans may not realize that threats and scare tactics had been used, Anastasiia said, "The Russian-Ukrainian war had started in 2014 in the Eastern part of Ukraine. Since then, we witnessed hundreds of threats of further invasion or escalation, so I was reluctant to accept the serious chance of a whole-scale war."

Anastasiia is from Kyiv, the capital of Ukraine, and she refers to it "as the greatest city in the world." She said her family is still in Kyiv or staying on the outskirts of the city. For the most part, the internet connection has been stable. Although there have been times when it was down, Anastasiia has been able to text and call her family on a daily basis.

Her family is staying in Kyiv to help provide children and the elderly with essential goods and as much comfort as possible.

Anastasiia said, "Men are ready to defend Ukraine with the army; some already do."

As a sophomore at National University of Kyiv–Mohyla Academy studying cultural studies, Anastasiia began in January completing one academic semester abroad as an undergrad at the UW.

As a method to deal with the crisis in her country, Anastasiia has made it her mission to raise awareness about the war in Ukraine to students and anyone who will listen. She is spreading the knowledge of the Russian-Ukrainian war with rallies, speeches and asking people to donate to the Ukrainian army.

"Ukraine is fighting for its freedom.," she said. "We will never give up on it."

She said the hugest possible support from Americans in this respect would be:

Financially supporting Ukrainian army with donations at: https://bank.gov.ua/en/news/all/natsionalniy-bank-vidkriv-spetsrahunok-dlya-zboru-koshtiv-na-potrebi-armiyi (This is National Bank Account to raise funds for the army)

Asking elected representatives to provide Ukraine with air defense weapons. She recommended that everyone research the situation at : https://how-to-help-ukraine-now.super.site.