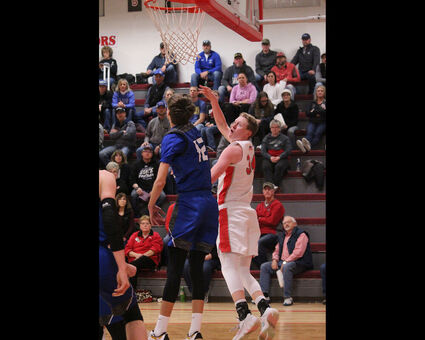 Potter-Dix's Zach Rotert puts up a hook shot earlier in the season against Hyannis. The Coyotes were the top seed going into the D2-11 Subdistrict Tournament.

Potter-Dix's Coyote basketball team finished their regular season with two more wins, and earned the number one seed for this week's Subdistrict Tournament.

On Friday, Potter-Dix earned a win by forfeit against a Minatare team lacking numbers due to illness.

On Saturday, Potter-Dix hosted the Perkins County Plainsmen for their final regular season game, and the stands were filled with red, white and blue and American flags on "USA Day."

Potter-Dix started fast and built a lead, but by the second quarter Perkins County had found a scoring groove and trimmed the Coyote lead. Potter-Dix co...