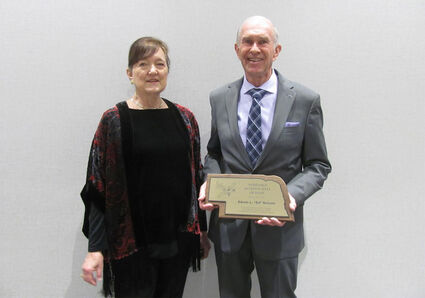 Kelly and Ed Nelson enjoy the moment after Ed was inducted into Nebraska's Aviation Hall of Fame.

To say Ed Nelson is a pilot is a bit of an understatement.

Nebraska's Aviation Hall of Fame was started in 1991 "with the intent of preserving the memory of Nebraskans who have made outstanding contributions to aviation, and to preserve the memory of their immeasurable contribution to our state and county."

Nominees from all walks of life are welcome – educators, FBO Operators, military pilots, designers and manufacturers, airport administrators and managers. Nominees must be a native-born Nebraskan, living or not, who has performed a significant portion of the achievement while being a resident of the state.

Although most recently from Sidney, Ed Nelson has strong ties to the Kimball area. He was raised on a ranch equipped with an airport on it in southeast Kimball County and was educated in the upper elementary grades through high school in the Kimball Schools. His mother taught third grade in Kimball for many years.

But more relevant to aviation, Ed has taught flying and aerobatics lessons to area students and has crop dusted many acres in the Kimball area. Yet those accomplishments are just a speck in the sky when reviewing his distinguished aviation career. He has more than 26,500 hours of flying time in over 145 different makes and types of aircraft and has taught hundreds of students. He has been flying for almost 50 years.

Ed's lifelong passion for aviation is clearly evident today as he introduces and explains the purpose, horsepower, weight, torque, structural integrity, inverted fuel and oil lines of his various planes, most of which are tail-wheeled airplanes.

All eight of his planes are housed in three different hangars at the Kimball Airport, where Ed and his wife Kelly have been daily attendees since 2015. They are pleased with their facilities at the Kimball Airport and credits former chairman Jason Lockwood and current chairman Ryan McElroy, along with the Airport Authority Board, for improving and maintaining the airport.

In the early 1960s, Kelly and Ed met at the Aviation Club at the University of Wyoming. Little did she know her life would also be consumed with aviation.

The decade of the 60s was a busy time for young Nelson. At 17, Ed soloed. He obtained his private pilot's license in 1963, gained his commercial license in 1965, and finished his instructor rating in 1966 – and also married Kelly in 1966.

After graduating from UW, Nelson joined the Air Force and eventually attained the rank of captain. Although Nelson didn't fly in the Air Force, his sight wasn't good enough for the class of license needed. Ed explained, "They wanted 20/20, and I was very nearsighted. I could barely cut a second-class commercial, but I had a waiver for eyesight, and I wore contact lenses for years. I did that from the time I was 13 until I was 77. Then I had cataract surgery, and now I don't need glasses."

After serving his four years in the Air Force, Nelson got out, but by then, the aviation industry was in a slump, and flying jobs were hard to come by.

Ed and Kelly continued to live in California, where Ed finally got the job he wanted – instructing aerobatics. He also was the chief flight instructor and general manager of Aerobatics Unlimited.

"That two and a half years was the most fun I have had in my life," he said. "We did loops and rolls, hammerheads, square loops and spins and much more. Even performing at air shows in California."

Not many people can say they were self-taught in the aerobatics field.

"I got the basics, and then I bought a lot of books, read a lot, and a lot of self-taught training," he said. His philosophy: "Go up high and have your parachute on and figure it out and make it work the way it was supposed."

But the Western Nebraska lifestyle was calling. The agricultural economy improved and, he said, "Dad was busy with crop dusting and needed help." The Nelsons returned to the family farm's Bar J Lazy V airport for Ed to work alongside his father in Nelson Flying Service.

Ed matter of factly stated that "aerobics saved my life on more than one occasion. Just being able to fly the airplane intuitively without having to look at the instruments to tell what was going on, you have a feel for it."

As with everything, the economy dictates where and how things occur and crop dusting was, according to Nelson, "not a road to riches."

Nelson took job various other jobs like co-piloting a slurry bomber to fight forest fires as well as flying for UPS and Fed-Ex. But in 1986, the Nelsons purchased what would be known as Sidney Aviation, and he also managed the Sidney Airport until 2015.

When you meet Ed and Kelly, you might notice a bit of a hitch in Ed's step. Although the 77-year-old buzzes around the airport hangars excited to show his planes and talk aviation, the hitch in his step is a reminder of a crop dusting accident in 1988.

"I had a disastrous crash," he said.

But always an optimistic, Ed said, "I got to meet a lot of nice folks in the medical field." He explained, "It was not a gentle crash, but I am still here." 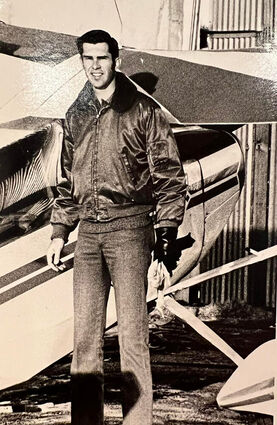 A young Ed Nelson poses beside one of his planes in the early 1970s. A half century later, he has been inducted in Nebraska's Aviation Hall of Fame.

The crash happened near Dalton. Kelly was flagging for a fatigued and overworked Ed. He clipped the top electric lines due to unforeseen whirlwinds in the wheat field, only to hit the ground while powering up with the nose up. Fortunately, Kelly had a radio and called for an ambulance out of Dalton. The incident left him in intensive care for 10 days, wheelchair bound for some time afterward, and leg and back braces.

"It is behind us and it was a learning experience," he reflected.

After he got back on his feet, he continued to fly and resumed his busy lifestyle.

Today, the Nelsons look forward to flying with friends to fly-out breakfasts and brunches as well as overnight trips to fly-ins in the Black Hills.

"When you have two or three airplanes going somewhere, that is what makes it fun," he said.

No doubt, Ed is as excited today for his love of aviation as he was when he landed his first plane with his father when he was 7 years old.