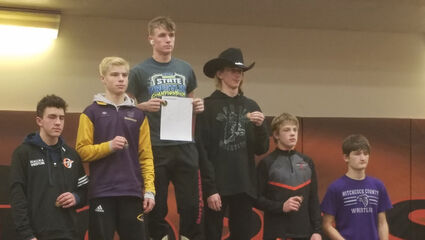 The Kimball Wrestling team competed in a quad meet on Friday, Jan. 14, at Chase County Gym. There were 5 matches wrestled in the dual against Chase County.

Kimball went 3-2 in the matches wrestled. Matthew Johnson won his match by tech fall at 106. James McGinnis at 132 and Trey Schindler at 152 each won their matches by fall. Cody Brinkman lost by tech fall at 120 and Justin Klosterman lost by major decision at 138 against their opponents. Chase County won the dual 57-17.

In their match against Wauneta-Palisade, one match was wrestled. Matthew Johnson won the...