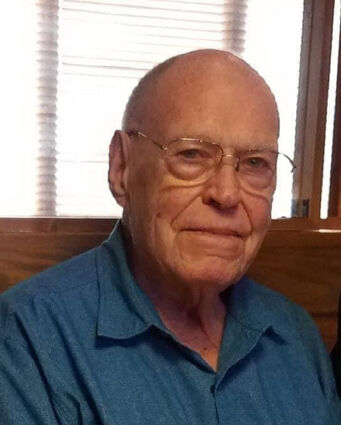 Don was the son of Ray and Clara Deboodt. He had the opportunity to work on the family farm, Bridgeport Equipment Company and the Sugar Factory at Bayard, NE and participated in both 4H and FFA.

Don joined the Air Force January 15, 1952. He married his high school sweetheart Jeanie Berg November 5, 1952 on his way to Camp Stoneman, California. December 9, 1952 he sailed for Yokohama, Japan on Christmas Day, arriving in Seoul, South Korea December 31, 1952. In Korea, Don served as senior radio operator. He was discharged from the Air Force on January 14, 1956. He received numerous military service awards and medals. In 2013, he received the Ambassador for Peace Medal, awarded by the South Korean government and presented to him by the South Korean Ambassador. His service was something that he was very proud of. A highlight of his life was being a part of the Honor Flight (May 3, 2015) to Washington, DC.

During their marriage, Don and Jeanie raised 5 sons, Dennis, Gregg, Tim, Scott and Mark. R. A. Berg helped Don and Jeanie purchased the Gambles Store in August, 1958 and operated it until he sold it in 1981.

While in Kimball, he was elected Mayor of Kimball in 1968, served on the Airport Authority Board, the Advisory Board for Bank of Kimball, the Board of Directors for Western Nebraska Community College and was President of the Industrial Development Committee of Kimball. He purchased a TV repair shop in 1975, and started Tele Tech and a Radio Shack franchise.

The family moved to Colorado Springs in 1978 to open a Mexican Restaurant. He also sold real estate, worked for a sign company and managed several private wastewater treatment plants. Don retired at age 82. Don and Jeanie divorced in 1982.

Don married Marilyn Busby, the second love of his life on March 12, 1986. Don enjoyed cooking and he loved cooking for friends. Barbequing and making ice cream was his specialty. Don had the chance to nanny to 2 of Marilyn's grand-daughters, Amy and Holly beginning in 1995. Don was christened with the nickname of "Grumpy," a name he wore proudly. He enjoyed restoring vintage John Deere lawn mowers and collecting John Deere memorabilia.

Don is preceded in death by his mother and father (Ray and Clara) and his brother and sister (Charles and Uzene).

He is survived by his 5 sons and their families; Dennis (Sharon) of Kimball, NE, Gregg (Renee) of Bothel, WA, Tim (Grace) of Prineville, OR, Scott (Deb) of Mesquite, NV and Mark (Brenda) of Newman Lake, WA., his wife Marilyn, 2 step-daughters (Janna and Jennifer), 2 step-sons (Greg and Doug), along with numerous grandkids and great-grandkids,cousins, nieces and nephews.

In a recent summary of his life he wrote, "I have had a very good life, wonderful family, good health, and I could not have asked for anything else."