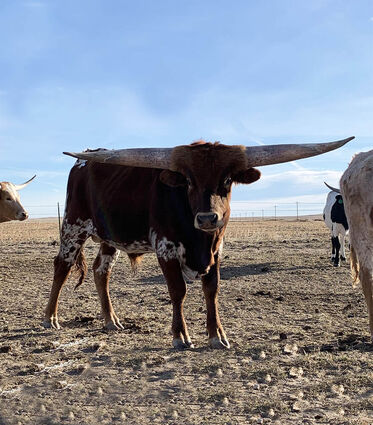 Gabe the Longhorn won the Texas Longhorn Breeders Association of America Horn Showcase for longest horns, tip to tip. The competition was held in mid-November at Fort Worth, Texas.

"So it is kind of like the Olympics, like getting a gold medal in the Olympics. Fort Worth that is the big show!" This according to Dave Haack. While Ernie Hottell chimed in, "It sure made it worth it."

The big show that the Hottells and Haacks are talking about is the Texas Longhorn Breeders Association of America-Horn Showcase.

The show is for registered Longhorns and is the only official horn measuring event for the Texas Longhorn industry.

Longhorn owners Ernie and Lea Hottell, Dave and Susan Haack, and Travis Hottell purchased Gabe, a Longhorn bull, as a 19-month-old and knew they had...