Lusche Leads Boys With 9 Points, 8 Rebounds; Next Up: South Platte 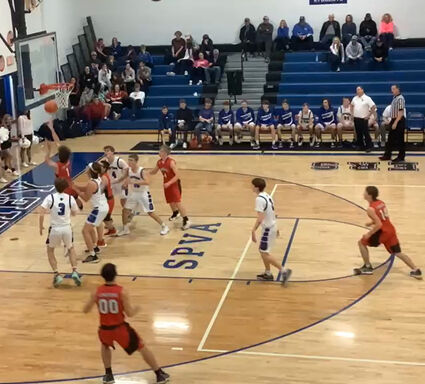 Kyler Lusche goes for a rebound and putback on his way to leading the Kimball basketball boys against Hershey on Dec. 17 with 9 points, 8 rebounds, 4 assists and 2 blocks. The rebuilding Horns lost, 72-24. In the JV boys game, Kyle Fraser led the Longhorns with 13 points and Draco Miller had a good night on the boards with 9 rebounds, but Hershey won, 40-24. Next up for for Kimball hoops is South Platte on Jan. 4.

Kimball's Lady Longhorns basketball team has had some success in the early going of the 2021-22 season, and hoped it could finish with a win in the final game of the calendar year and go into the new year with a winning record.

But Kimball will have to settle for a 3-3 record through December, as Friday's road matchup with undefeated Hershey did not go Kimball's way.

The game started very close with both teams playing aggressive defense and limiting offensive opportunities. The low-scoring first quarter had the teams within a point of each other until the Lady Panthers went on a run to close out the first period and begin the second. Kimball was down nine points at the end of the first, and the Hersey squad was piling up the points in the second period.

A 20-9 second quarter gave the Lady Panthers a 20-point, 36-16 lead at the half, and Kimball could not make the adjustments at halftime to turn things around

Hershey scored another 27 points in the second half, and cruised to a 63-24 victory. The Hershey team proved to be a group of good, athletic shooters that minimize mistakes and capitalize on opportunities, so it is no surprise to see them at 6-0 and at the top of the standings.

The Lady Longhorns got to play against a premiere team and see where they need to bolster their efforts and make adjustments to be competitive, which should help as the season progresses.

Seniors Katie Heeg and Chantel Malson each scored seven points for the Lady Longhorns, while Heeg grabbed 10 rebounds and Malson 7.

The Lady Longhorns stand at 3-3 overall and 0-1 in the league. They next play South Platte in Big Springs on Jan. 4.