Horns Wrap Up First Semester On The Mats 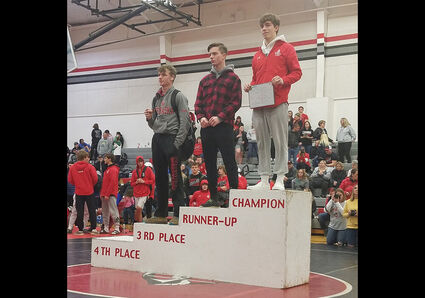 James McGinnis, left, is recognized on the award stand at Sutherland after wrestling his way to third place.

On Friday December 10th the Longhorn wrestling team traveled to North Platte St. Pats for an 8 team round robin tournament.

They scored 115.0 points and tied Brady for 3rd overall. The tournament was won by Maxwell with 193 points.

All 5 varsity wrestlers placed in the top 3. We crowned 3 champions: Cody Brinkman at 120, James McGinnis at 138 and Trey Schindler at 152. Matthew Johnson was runner-up at 106. Justin Klosterman was 3rd at 145.

Justin Klosterman was the highlight of the tournament as he won his first 2 matches of his high school career, both by pin.

On Saturday December 11th the Longhorn wrestling team traveled to Cheyenne for the Charlie Lake Invitational at Cheyenne East High School. This is arguably the toughest tournament that we will attend this year.

Cody Brinkman was entered into the JV division and finished 2-2 for 3rd place on the day. Matthew Johnson finished 1-2 at 106.

Trey Schindler continues to improve against some tough competition. He was defeated in the semifinal by a returning state placer from Wheatland WY 6-1. He was pinned by a Rock Springs wrestler in the 3rd place match to finish the day in 4th place. We were without the services of Justin Klosterman due to ACT.

On Saturday December 18th the Longhorn wrestling team was very shorthanded at our Sutherland tournament because of sickness and injury.

We also found out that we have lost Derek Kauffman for the season due to a shoulder injury that he sustained in the preseason. He will have surgery after Christmas.

We also found out we will be without the services of Aaron Gillming this year after he sustained a knee injury in the preseason.

The Christmas break is very needed right now to get some key guys healthy and over the sickness that is going through our room.

If we can continue to develop that we can start to beat some of the tough opponents that we are losing tough matches to right now.

We return to action on January 8 at the Garden County tournament.

We want to wish all our fans and supporters a very Merry Christmas and Happy and Healthy New Year.